Today I wore both the Band and my Garmin Forerunner 10 in the US Half-marathon (San Francisco) to compare their usability while running and the data they collect.

TL;DR I love having the extra data from the Band after the race (eg. heartrate) but without Strava integration to view the data in more detail I can't leave my Garmin behind just yet. Sadly the secondary readouts (heart-rate and distance) on the Band seem too small to read easily while racing.

I wore the band on a different wrist to the watch and it definitely felt heavier than the Garmin, however I hardly noticed the difference once I started running. I started the GPS detection at the same time on both devices; the Band was ready to go a lot faster than the Garmin.

As I mentioned in an earlier post: I love that the Band has the heart-rate and GPS sensors built-in, so it can do all this without requiring a phone nearby!

While running both devices seemed to keep similar distance/pace time, with the km splits being pretty consistently recorded. The Garmin beeps at a km split which is fine, but sometimes I hear the beeps from other runners' watches around me and I look down for a split and it's not there. The Band vibrates so there's no false-positives... I know when I glance down that the split time will be there. The more direct feedback is a nice touch :-)

The 'run tile' display looks like this (apols for the image quality):

I've configured it via the app Band > Manage Tiles > Run to show heart-rate, distance, and duration. This means the pull-down drawer will show calories and current pace. Double-tapping the action button will cycle between the currently displayed data so that each element occupies the bottom (larger) position. This is useful, since I found it tough to read the two smaller numeric readouts while running... I almost wish the entire display could be set to show one stat really large, and the double-tap could then cycle between that view and the more crowded setup shown above...

I mainly glanced down at the Band when it vibrated to indicate a km split; it was slightly easier to read that view (I think because the numbers weren't changing). I didn't find myself looking at the heart-rate display much during the race... maybe because I wasn't sure to do with that information anyway.

I used the Garmin more frequently to gauge my progress since I found its display easier to read on-the-run.

The main reason to wear both devices was to compare the results - Microsoft Band and Health app versus Garmin Forerunner 10 and Strava - so here they are:

The Garmin slightly over-estimated the distance (but so did the Band, by slightly less) - they are both accurate enough, but I guess the Band did better. The average pace is the same for both, however the calories estimate is again way off. I've no idea how it decides the Fats and Carbs calorie numbers... nor which is more "correct".

The Microsoft Health app has the heart rate info: average, high, and low; and also the Recovery Time which I presume is some sort of indication of how long you should wait before exercising again? They really need to help us out with how interpret some of this stuff!

The pace data for the Band is shown along with the heart rate and elevation in graph form (below). The problem with looking at this information in the app is how compressed it is - you can't easily "zoom in" to see the variations in pace or elevation over time.

By contrast, the same data in Strava (minus heart rate, which my Garmin watch doesn't record) is much easier to interpret: 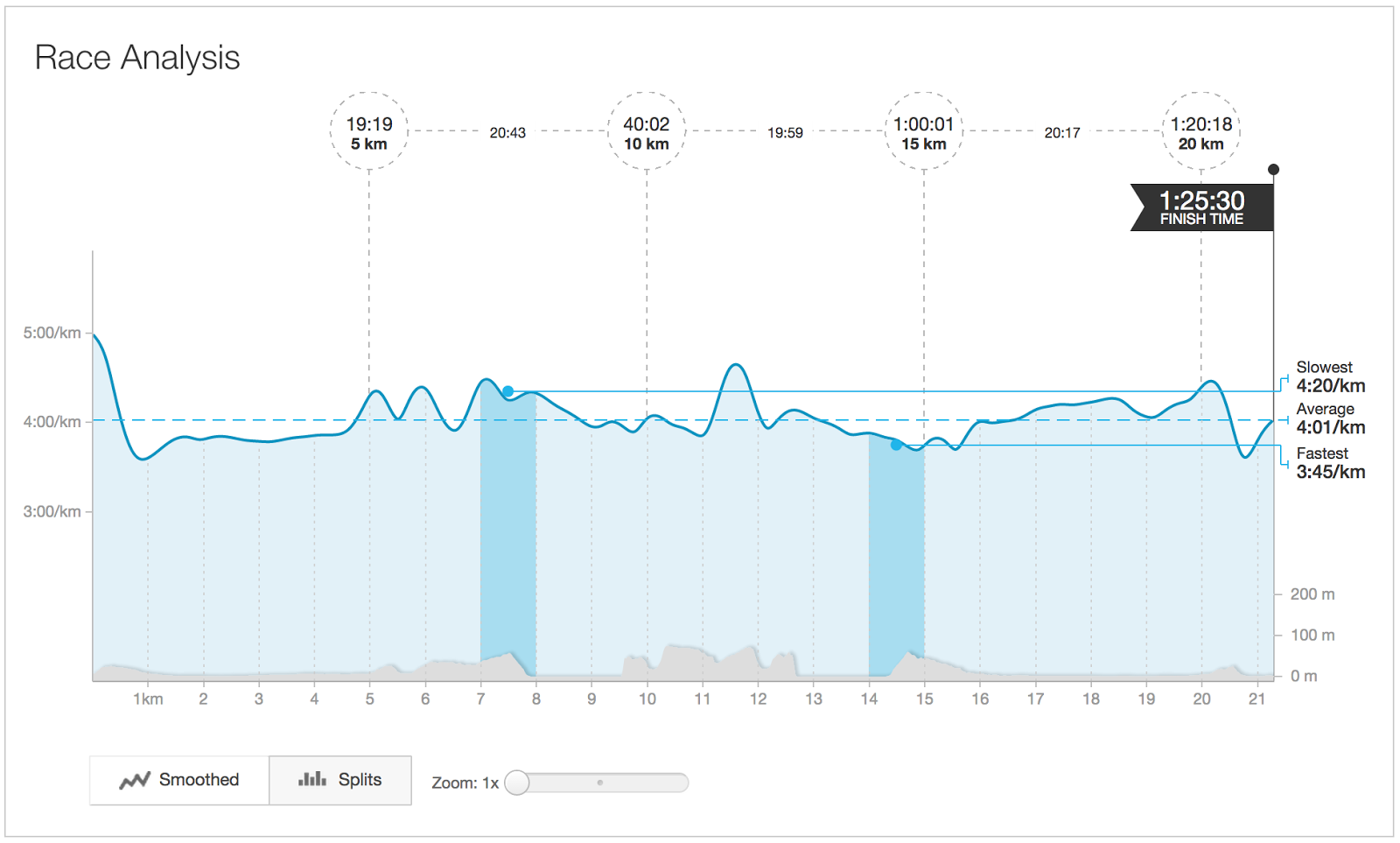 Until Microsoft Health has similar visualizations (or they are able to integrate with Strava), I won't be able to use the Band on its own... I like these graphs too much :)

Here's the two maps side-by-side. The GPS accuracy seems fine for both devices - neither had a major error (which does sometimes happen). Microsoft Health has the neat speed-coloring, but again it's hard to see the details inside an app. The Garmin data rendered by Strava is much easier to zoom in and browse around. 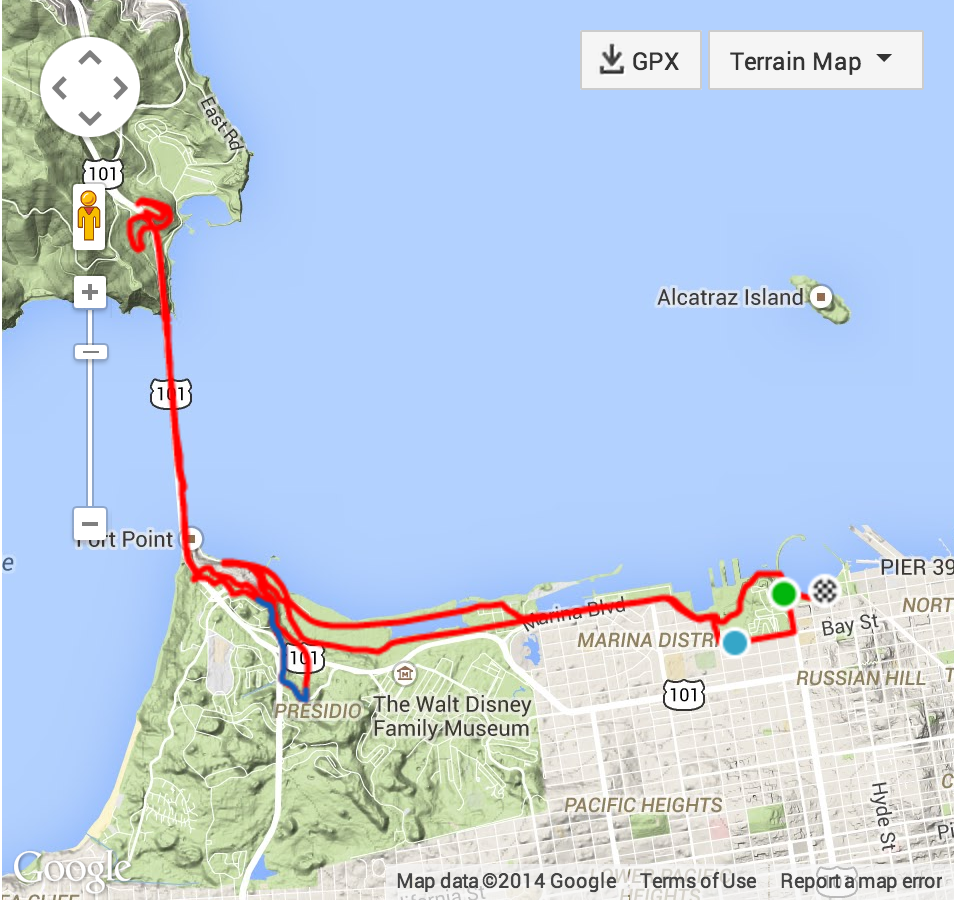 Finally, just for the sake of it, here's the two sets of splits from the Band and the Garmin. Easily close enough to be considered equally accurate over the distance. The nice thing about the Strava presentation (which you can't see here) is how interactive their rendering is: hoving over a split highlights the map and helps you visualize the elevation and location on the course. 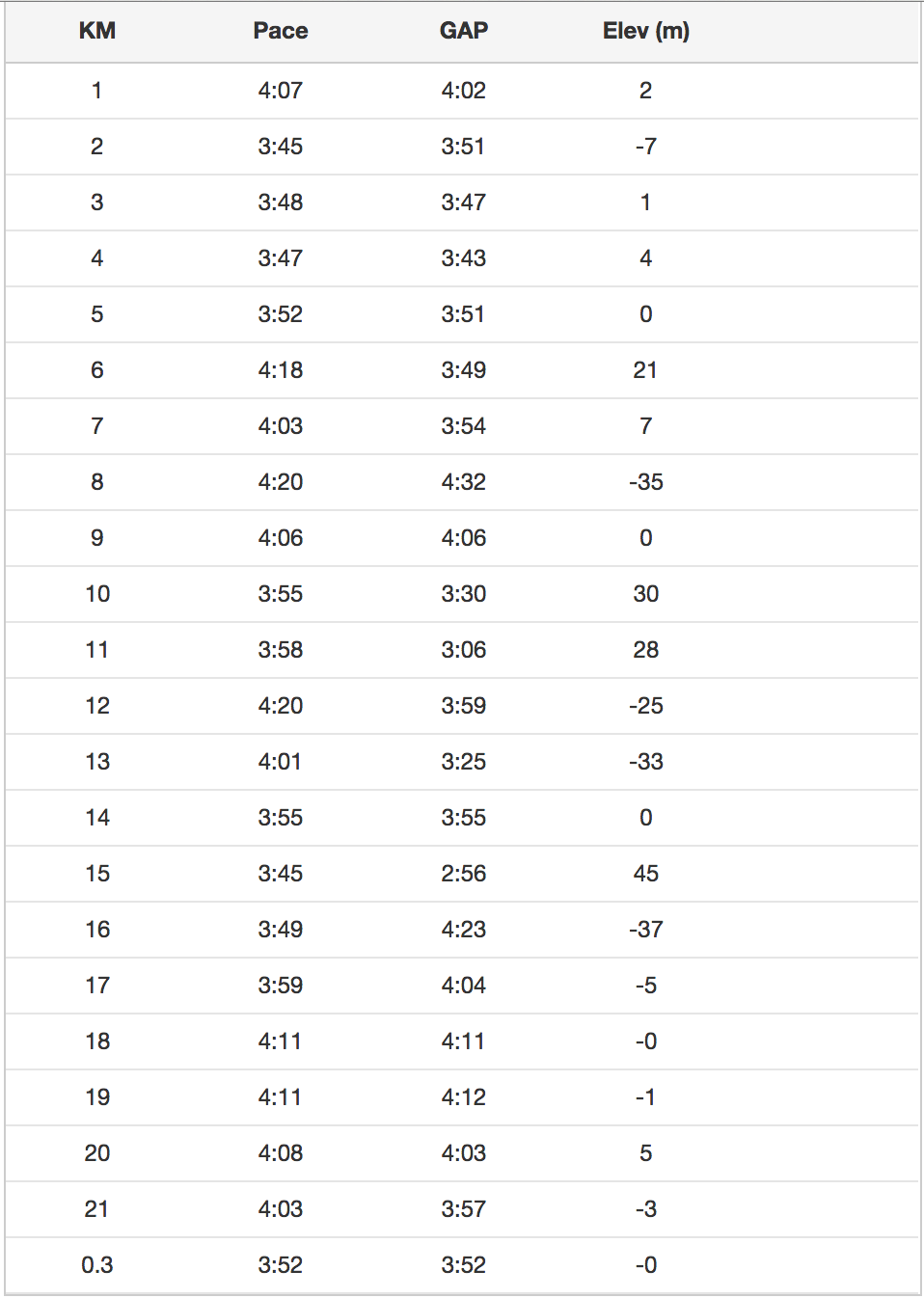 Because I wore the Band overnight I only had a short time to re-charge it before the race, so it was showing as 80% charged when I left for the start line. To really test it, I left the display lit the entire race (although you can press the power button to show and dim it while running). At the end of the race (around 90 mins) the battery indicator looked to be around 50%... it's not very accurate but perhaps some indication of how long the battery could last while running with GPS enabled. The Band worked throughout the rest of the day - receiving notifications and step-counting - finally complaining about low-battery around 8pm... a little over 12 hours of use including the race.

I still really like the Band (despite this little problem) and will continue to train with it in addition to my Garmin for a while yet. Some of the non-running functions (like notifications) have been almost as much fun to play with as the running features :)
Posted by Craig Dunn at 12:00