Android TextToSpeech API with Xamarin: it talks too!

A recent post covered Apple's new text-to-speech API in iOS 7, but forgot to mention that Android has actually had this capability for a while! It's really easy to add text-to-speech to a Xamarin.Android app: just implement TextToSpeech.IOnInitListener (which is a single method: OnInit) then create a new TextToSpeech instance:

The TaskyPro sample code has been updated so that both the iOS and Android apps have a Speak button. The Android app looks like this: 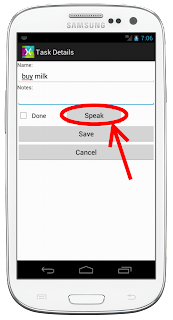 Check out this cool TtsSetup sample for Xamarin (via StackOverflow) for more details on how to customize the Android TextToSpeech API.

Another new iOS 7 feature is built-in support for barcode-scanning via the AVFoundation AVCaptureDevice API. Back in 2012 I threw together MonkeyScan using Windows Azure Services and the ZXing barcode scanning library. For iOS 7 I've updated the code to use the Azure Mobile Services Component and the new iOS 7 barcode scanning API instead.

The app looks like this when scanning a PassKit pass: 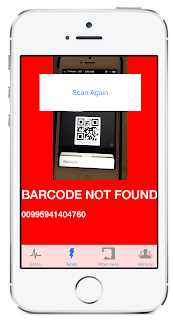 The code that sets up an AVCaptureDevice for 'metadata capture' (as opposed to capturing an image or video, I guess :) is shown below:

You can specify specific barcodes to recognize or use output.AvailableMetadataObjectTypes to process all supported types.

...and it speaks!
Since the app now requires iOS 7, it can also use the new AVSpeechSynthesizer to speak the scan result as well (see previous post).

The MonkeyScan github repo has been updated with this code.

It's so easy, I added speech synthesis to the this TaskBoard to-do list example in about 5 lines of code. Now the app can read the to-do item back to you :) just by adding this code:

The UI now looks like this: touch the Speak button to hear the text read back to you. 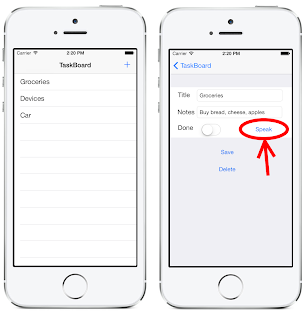 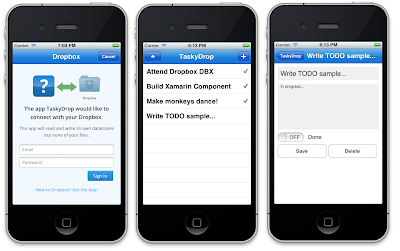 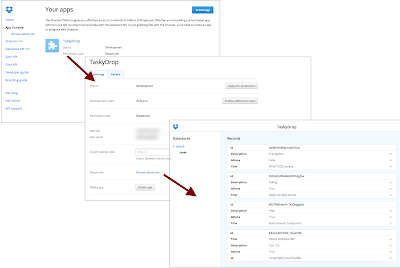 Last night I was given the opportunity to present Xamarin's Mono for Android to the East Bay Google Developer Group. It was a lot of fun, with plenty of the audience asking a lot of great questions and generally being curious about how C# can be used to build Android apps. Here are the slides from the talk - please drop me a line with any feedback or questions!

One topical question was "what does using Xamarin and C# offer existing Android Java developers?". I have a couple of thoughts which are listed below (in no particular order):

Learn a new language!
The days of specializing in a single language throughout your career (or even throughout the year!) are over. Once upon a time it was COBOL all the way down, and you could argue that it's still enough to just know C/C++. But it's no longer the norm ~ developers want to grow and learn, and use the best tool for the job (whether it's Perl, PHP, Java, Ruby, C#, F#, Javascript, TypeScript, Go, or whatever).

It can be daunting though, to start from scratch and learn a new IDE, framework and syntax - which is why I think C# is a great progression for Java devs. The two languages are obviously related - there is a lot of common syntax and equivalent keywords that make it easy to get proficient quickly. They're both strongly typed, so the IDE and compiler can really help you learn. Then once you know the C# basics, a whole world of new APIs open up to you: LINQ, the .NET framework's serialization and web service features, Parallel Task Library and async support, reactive extensions, and more.

It also introduces you to another IDE (Visual Studio is a great tool, as is Xamarin's free MonoDevelop IDE), which in turn can encourage you to further explore other languages and platforms (suddenly it's a small leap to work on Windows Phone, or try F#). Using the free trial you can easily get productive in C# and Android development without any up-front cost: you can run your apps on the Android emulator, and choose to work on either Windows or Mac with MonoDevelop.

Cross-platform development!
There are a lot of Java developers who are already proficient with the Android SDK and have published successful apps to Google Play, or Amazon, or Samsung app stores; and there's another group of corporate/enterprise developers building apps for internal/extranet use that were designed for Android. When these developers ask "why Xamarin?", I never say "throw away everything you've done and re-write in C#!" -- that'd be crazy ;-)

But what happens when you want to take these apps cross-platform, either to make more money on the iOS and Mac App Stores or to better support a corporate BYOD policy which means your internal apps need to run on iOS and Windows? You can choose to learn Objective-C to write for iOS and C# for Windows... or take the opportunity provided by Xamarin to use C# for all the non-Java platforms and reduce the amount of code you have to support and re-write by half!

Following on from the first point, I think learning C# is a much smaller leap for a Java developer than Objective-C; and once you've done so you can work on either iOS apps using Xamarin's MonoTouch or Windows Phone, Windows 8 and Windows RT tablet apps! You might like C# so much that you do go back and re-write your Java, or at least start building a hybrid that shares some Java and C# code...

Xamarin does Android well too :)
If Java developers do fall in love with C# then they also find that Xamarin does Android just as well as anyone (probably better!). Our MonoDevelop IDE (and our integration with Visual Studio) means you get an awesome coding experience (autocomplete/intellisense/code completion, debugging, refactoring, source control integration, etc) as well as a drag-and-drop UI designer. You be the judge of whether it's a better experience than Eclipse :)

Fin
In summary, why not? As a Java developer you have a lot to gain and nothing to lose by giving C# a try. A whole world of new platforms, tools and frameworks become available with a very low barrier to entry. Try it - you just might like it ;-) 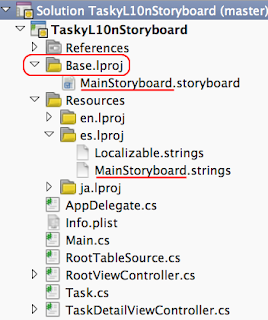 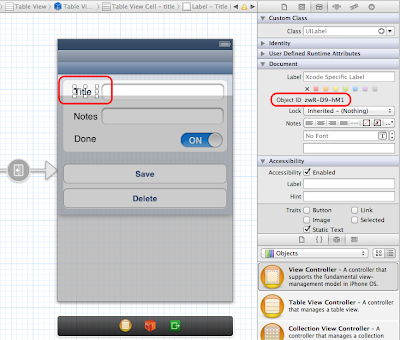 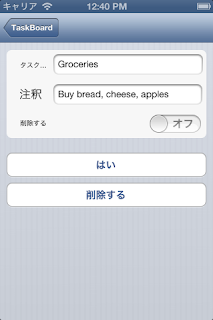 What about iOS5 and earlier?
This method only works on iOS6. To localize text on earlier versions of iOS you will have to duplicate your Storyboards and XIBs for each language, or create outlets for all the controls and set their localized text values in code using NSBundle.MainBundle.LocalizedString().
There is another localized sample - TaskyL10n - which shows how to localize text elements directly and uses MonoTouch.Dialog.
Posted by Craig Dunn at 12:35 No comments: