I had no clue Microsoft was working on the Band until the reviews starting to leak out last night, but I was immediately keen to try one out. Today I dropped by the Microsoft Store at opening to pick one up, and I'm happy to report it's actually a pretty cool piece of tech.

Let me start by saying two things: (1) I really wanted to like the Band ~ smart watches don't really appeal to me but this feels smaller, less obvious and more focused that the Apple and Android devices (2) my primary use-case is running - with GPS and heart rate recording - so that is my measure of the device's success.

TL;DR I like the device a lot, my initial impression is that it does what I want while running and it pleasantly surprised me in a lot of other ways as well. 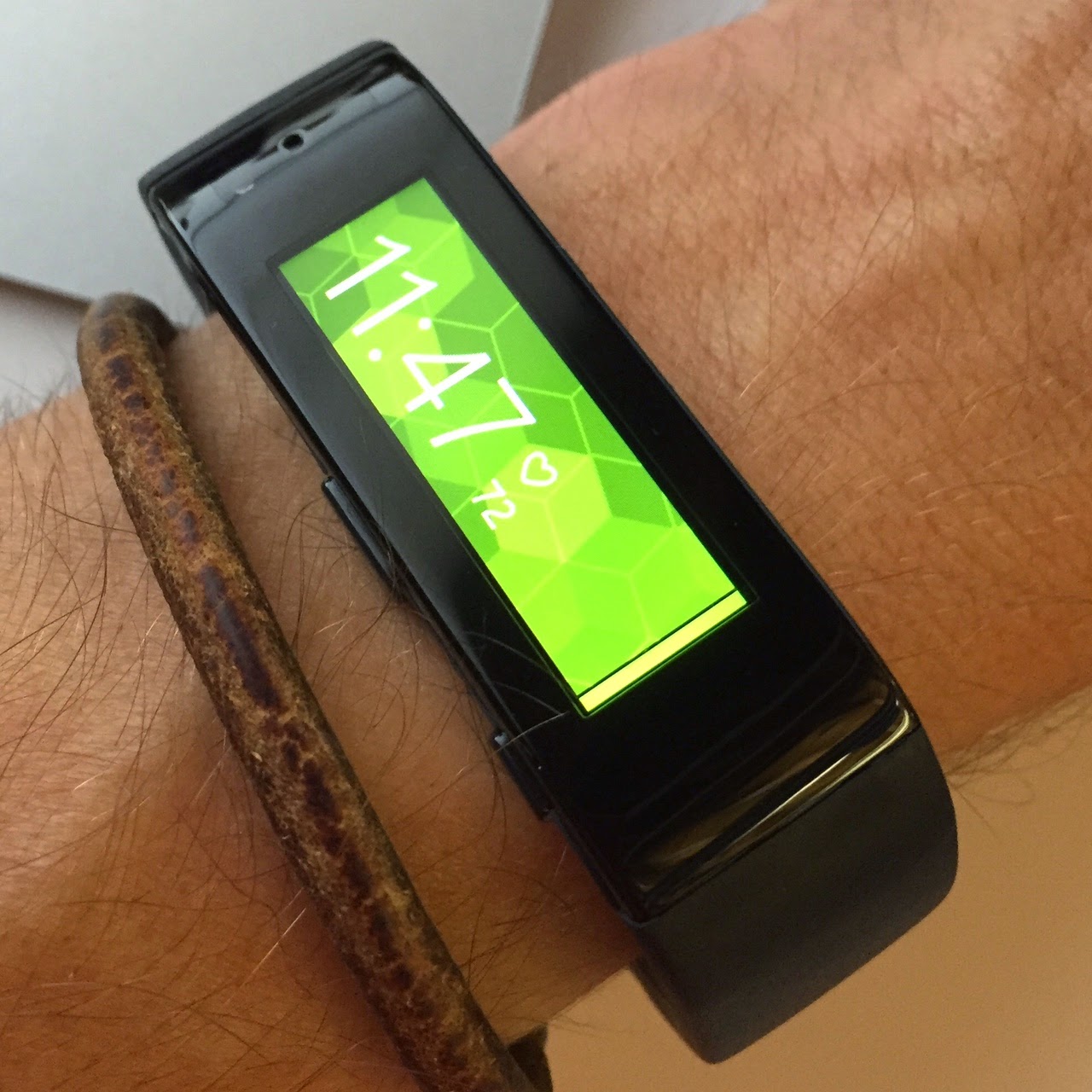 The initial setup was painless: I downloaded the Microsoft Health app to my iPhone, paired the Band and was immediately able to receive alerts (texts, voicemail alerts, etc) on the Band. The app was easy enough to figure out: I changed the color scheme and turned on Facebook, Twitter, Notifications... and everything just worked.

Using the Band's menu on the phone screen is surprisingly smooth - although I'm not sure how people will bigger hands will find it. The device itself is less bulky than I expected (especially on my small wrist)... don't get me wrong it still feels "big" and looks a little "wide", but it's not heavy and after I'd worn it for a while I barely noticed it.

Playing around with heart-rate monitoring, calendar, notifications, alarms, the step counter, the UV detector and the workouts feature was a lot of fun; but as I said my primary concern was using it for run training...

I was easily able to figure out how to get everything working, but here is the running "support page" for reference. To be clear - you do NOT need your phone with you while running! The GPS functionality is built-in to the Band, along with the step-counter and heart-rate monitor, so you get plenty of good data while exercising without dragging a phone around :)

To compare the accuracy and usability of the Band I wore my Garmin Forerunner 10 for comparison. They both took a while to 'find satellites' (and it always feels like forever when you want to start running), but the Band was actually ready slightly ahead of the Garmin.

During the run, they both kept in pretty close sync, beeping out kilometer markers at roughly the same time (and therefore showing similar splits). There was a bit of drift between them but nothing dramatic. The screen of the Band was constantly lit (which was great, as I was running at night), and the elapsed time is pretty easy to read. The heart-rate text is pretty small to read while you're moving unfortunately.

Your pace is available by 'swiping down' on the screen while you're running. It auto-hides after a while, returning the display to the elapsed time and heart-rate. I haven't got pictures of these screens and haven't found them on the support site yet. At each kilometer marker (or mile if you must) it beeps and shows your pace-per-kilometer/mile for a few seconds, before again reverting to the elapsed time display.

After the run was over, I uploaded my Garmin data to Strava (as I normally do) so I could compare the results. The Band seamlessly sync'd its data to my phone as soon as I opened the Microsoft Health app.

Here's the summary info from the Microsoft Health app versus Strava's view of my Garmin-collected data. Both compare pretty well - the Calories calculations are fairly different (something to investigate further) but the distance and pace are pretty close. The best thing about the Band is the inclusion of heart-rate info, without the hassle of a chest-strap or other additional device. 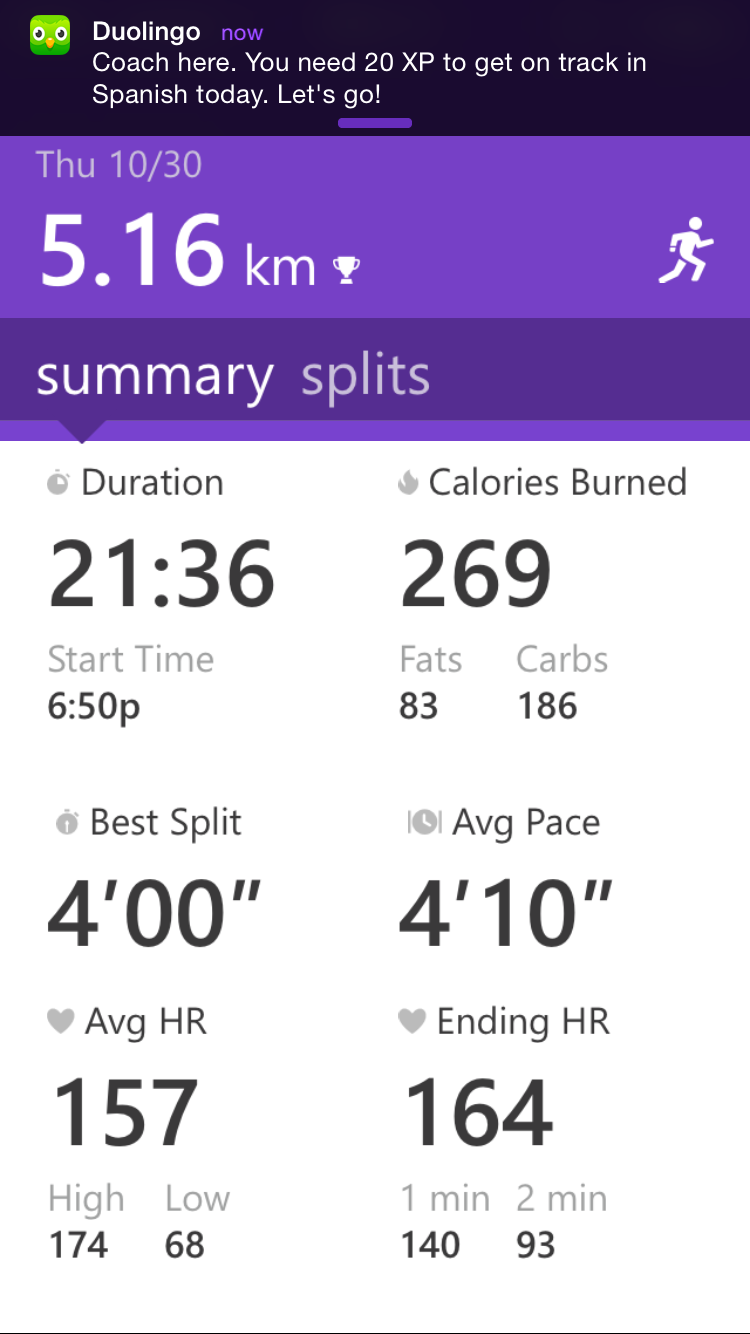 The Band also has an interesting 'Recovery' estimate (not shown) which I'm still to learn more about.

Here's the two maps (Band/Health app vs Garmin/Strava). The Band does cute color-coding of pace, I'm not sure whether Strava can do that with more information (it does not have any heart rate data available as the Garmin Forerunner 10 does not support that). The Band track seems a little more accurate, but with a sample size of one it's a little early to draw conclusions about that. 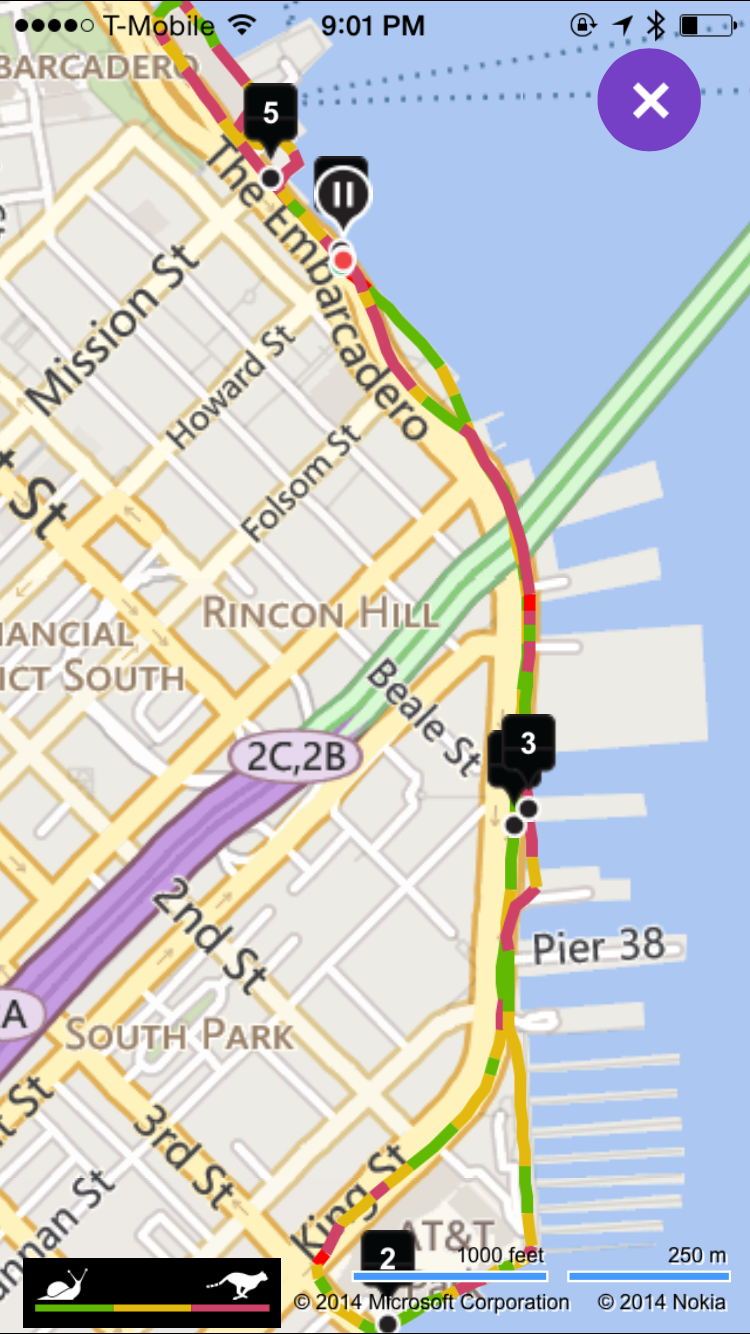 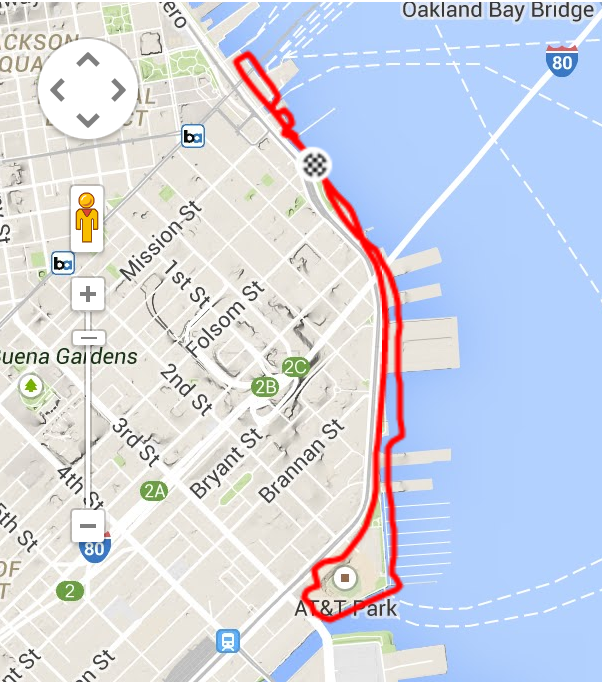 Both provide similar splits data, although the data varies slightly (due to GPS variance). 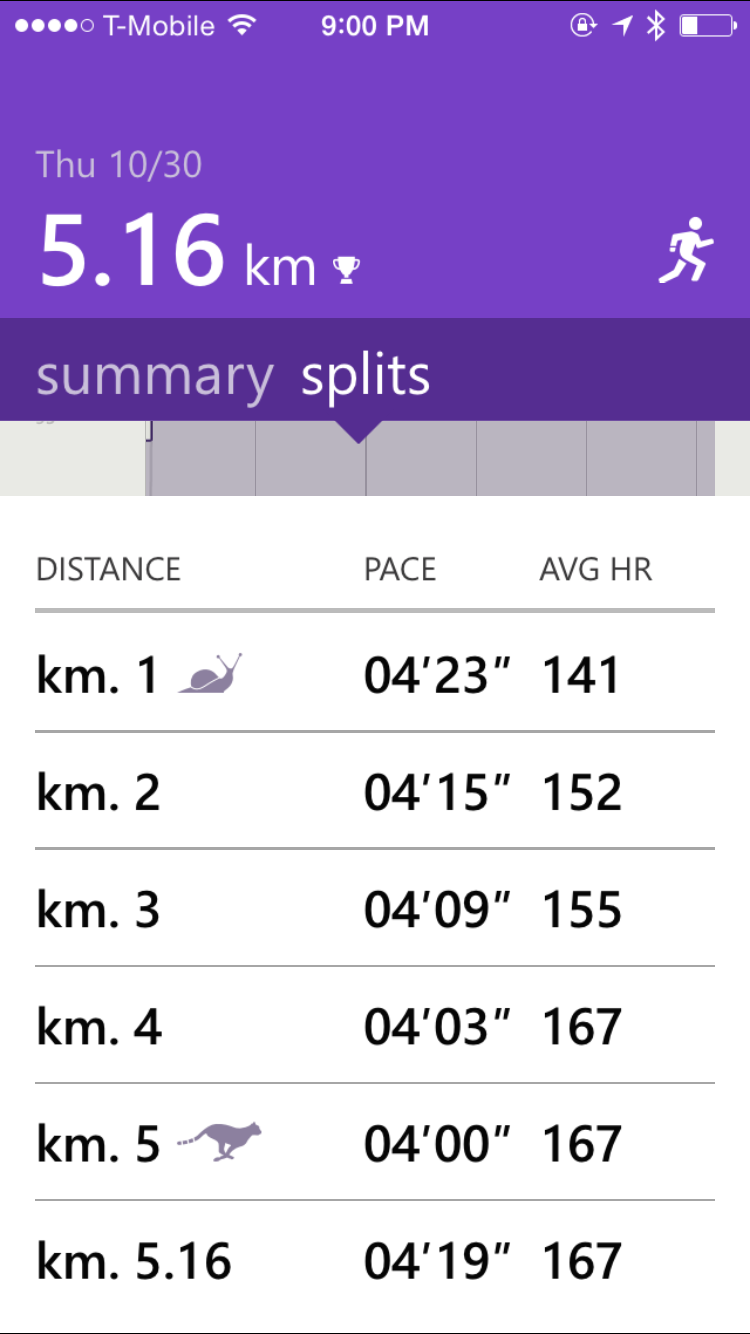 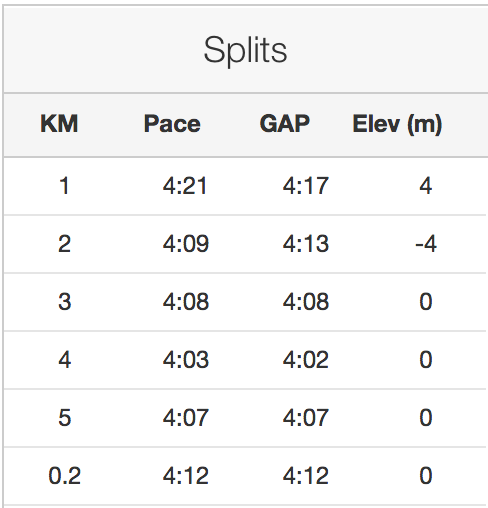 The Microsoft Health app shows pace, heart-rate and elevation. Strava doesn't get heart-rate data but graphs the other two (note the Garmin's GPS error causing a pace calculation error in the Strava graph around the 2km mark). 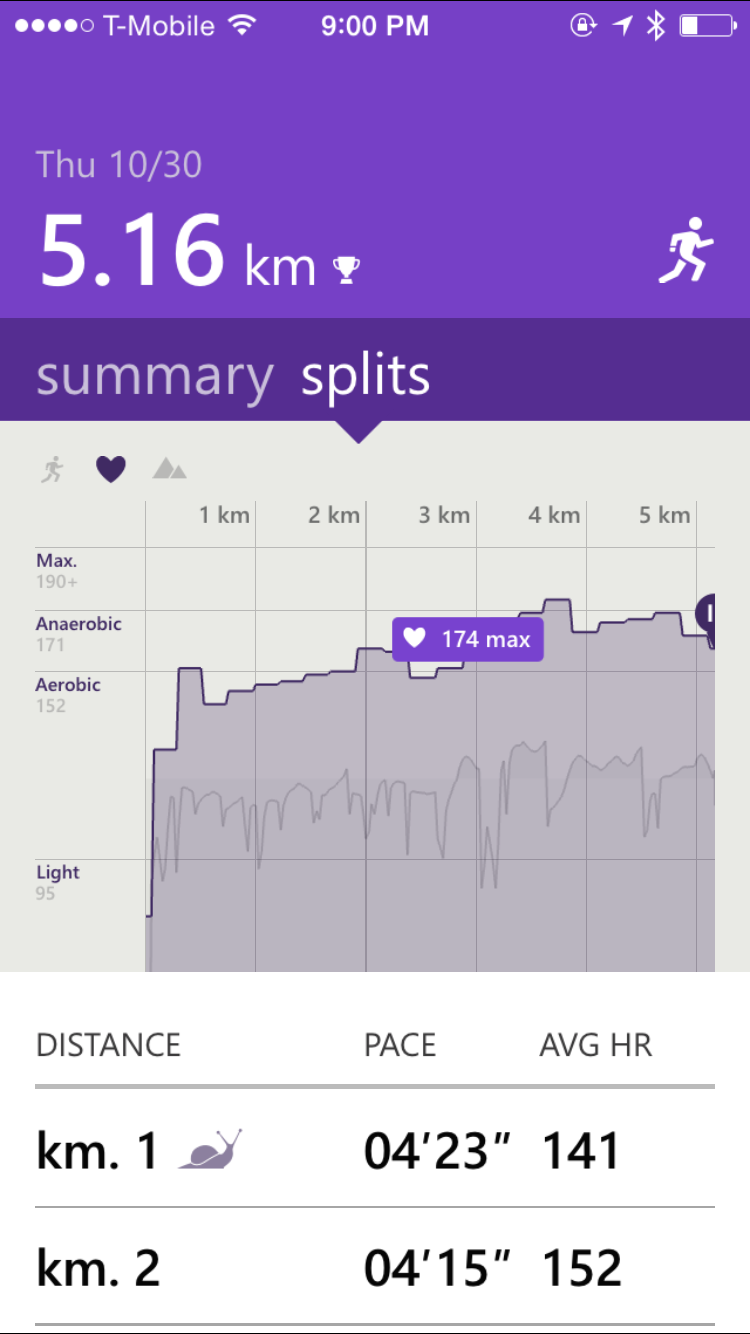 Navigating around the map, splits and graphs is fairly easy once you figure it out. Just tap and swipe around until you get the hang of it.

After less than a day it's probably a bit early to draw conclusions, but I overall I had a lot of fun playing with the Band today. Can't wait to race with it and check the data against the watch (and to see heart-rate info for the first time in ages). Here's hoping the number of app integrations increase and they eventually work out sync'ing with Strava!
Posted by Craig Dunn at 22:17