Anatomy of a c# iPhone app (with MonoTouch)

Wow - it has been a long time since my last post... and with good reason ;)

Firstly I've been busily writing (along with Wally, Chris, Martin & Rory) for Wrox' upcoming Professional iPhone Programming with MonoTouch and .NET/C# which is available for pre-order on Amazon. If you are interested in developing for the iPhone using C# and the .NET Framework it should be a great addition to all the resources already out there on the web.

Secondly I've been working on an iPhone app for MIX10 in Las Vegas next week (with help from Chris, Miguel & Geoff). Whether you are heading to MIX or just curious about C# and MonoTouch on the iPhone, why not download and give it a try?

Since the MIX10.app was first 'announced' on twitter #MIX10 there have been a number of requests for the source code. Unfortunately the source isn't public at the moment, however that doesn't mean we can't talk about "how it works". To start with, the MIX10.app is based on two previous iPhone apps written in C# with MonoTouch, and whose source code is available:
If you have an Intel Mac (with Snow Leopard) then you can download both the Apple SDK and the MonoTouch trial version for free and get both these C# .NET examples running in the iPhone Simulator for yourself. To deploy on a real iPhone requires certificates and licences (from Apple and Novell/MonoTouch respectively).

MIX10.app
Here's the overall class diagram for the MIX10.app (with the views shown too). Even without seeing the code it's clear that the classes themselves are not overly complex (ie. few methods are required; and inheritance can be leveraged to share common functionality). 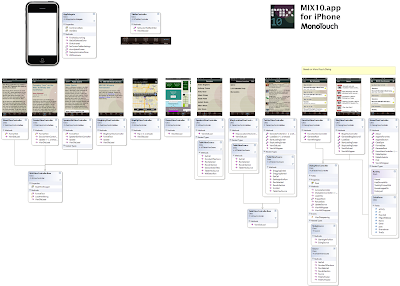 The MIX10.app also uses Miguel's MonoTouch.Dialog framwork and he's posted a snippet of code on gist.github which is responsible for this screen (on the left)

And he also posted this code which creates the 'My Schedule' view on the right. Pretty neat use of Linq, eh? I'm not sure I've seen such an expressive user-interface expressed in so few lines of code before...
The object model closely follows the data available from the api.visitmix.com site's OData and RSS feeds. These are plain vanilla C# objects which also run on the server to download and package the data for the iPhone - the object graph is serialized by a .NET application on Windows Server 2003, downloaded by the WebClient class on the iPhone (thanks to MonoTouch) and de-serialized ready for display. A perfect example of the cross-platform possibilities facilitated by MonoTouch and having the .NET framework available on both server and mobile device. 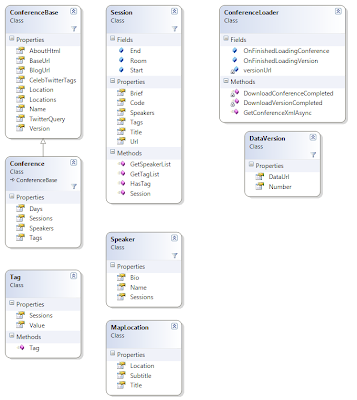 Finally, here's a quick overview of ALL the screens in the app. 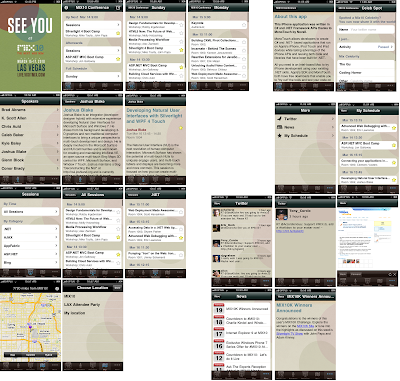 ...and if you're a Windows Phone Series 7 fan-in-the-making, it should be obvious that having a shared set of services and functionality in C# that can be deployed across iPhones with MonoTouch, and Silverlight/Windows Phone 7 with only UI code needing to be customized is a great way to achieve maximum reach for your apps. The MonoTouch Roadmap is also targetting a Q3 release of MonoDroid, so with a bit of imagination it isn't hard to see where the future of cross-mobile-device development is heading...
Posted by Craig Dunn at 01:36