Decided it was time to take another look at Moonlight (since 2.0 was released on 17-Dec-09), so I grabbed a Virtual PC image download and within a few minutes was testing my existing Silverlight sites on Linux! The pre-installed software (Firefox, Moonlight, even MonoDevelop) makes 'getting started' super-easy.

Happily, RaceReplay.net works fine -- although it uses the 'CTP' of Microsoft's Map control - the RTW requires SL3 which might throw a spanner in the works :-( 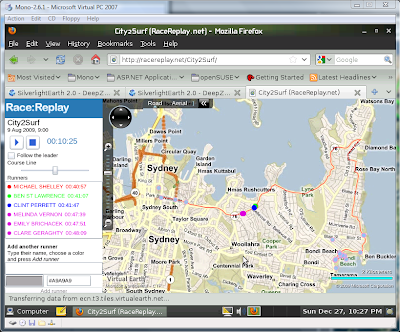 The DeepEarth open-source DeepZoom-based map control does work, however, which is great.

Searcharoo's Silverlight UI breaks with Could not load type 'BufferedStreamReader' from assembly System.Json so I'll have to investigate that; might have to get a different Json lib.

Anyway, IMO Moonlight 2.0 is a great achievement by Novell and the VPC is a great way for .NET developers to learn about it... have fun!
Posted by Craig Dunn at 03:30