Geoquery 0.7 has been quickly updated to 0.71 to fix the bug from yesterday.

It was while I was describing the problem that I was reminded how confusing it is for users when something "fails silently".

Imagine if the a "File-Save" function didn't report an error when your latest masterpiece couldn't be saved... you'd close the application and expect the data to be available next time - but it would be gone... forever! I strongly discourage rampant use of try{}catch{} in C# because it often (inadvertently) leads to silent failures.

By drawing the polygons on the Map & Sphere, but drawing them incorrectly, Geoquery was giving the impression that it was working when it wasn't. OK, probably not as severe as losing a file, but confusing nevertheless. It seemed important enough to fix and update (even though just a day earlier I'd decided it was "good enough for now"). 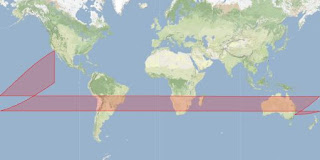 P.S. a couple of other issues were also fixed, thanks Morten!
Posted by Craig Dunn at 00:06