Originally this script was ScriptDiagram2005 (on CodeProject), based on a SQL Server 2000 version by Clay Beatty. 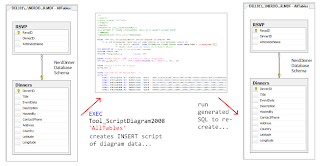 I had already tested the '2005' version on "Katmai" betas of SQL Server 2008 and it worked fine, so I hadn't bothered to update the script until I read
this thread (requires login) and learned of the built-in sys.fn_varbintohexstr function.

This made the previous custom function Tool_VarbinaryToVarcharHex redundant, so I have updated the code to ScriptDiagram2008. There isn't really any code to download - just view the script (copy/paste to an .SQL file to apply to your database).

Makes it easy to add your diagrams to source control - still figuring out how to fit it nicely into Visual Studio Team System Database Edition GDR...
Posted by Craig Dunn at 02:27