*.MDF' cannot be opened because it is version 655. This server supports version 612 and earlier

When I'm not playing with Silverlight and Virtual Earth, I've been figuring out MVC (thanks to Scott, Scott and Phil). However pretty early on I hit a weird error in Visual Studio 2008 when trying to 'open' a database via the Server Explorer:

The database 'C:\SOME\FOLDER\MYDATABASE.MDF' cannot be opened because it is version 655. This server supports version 612 and earlier. A downgrade path is not supported.

I had created that database in Visual Studio 2008 (File → Add New Item → SQL Server Database) and now it wouldn't let me open it!

What I had done is opened, edited and closed the database file using SQL Server 2008 Management Studio. Shouldn't be a problem, right, since I'm also using Visual Studio 2008?

Turns out that when you are create or open a file-based (.MDF) database (as opposed to using a database instance or server connection) Visual Studio needs some 'help' knowing what tools to use.

When I edited the *.MDF file in SQL Server 2008, it made some fundamental "changes" to the file (even though I didn't 'upgrade' it) which prevented SQL Server 2005 from opening it. Why was Visual Studio 2008 confused? It's a configuration setting!

To fix the problem, go to Tools → Options... → Database Tools → Data Connections and change the SQL Server Instance Name from whatever it was (probably a SQL Server 2005 instance) to your SQL Server 2008 instance, hit OK and you should be fine! 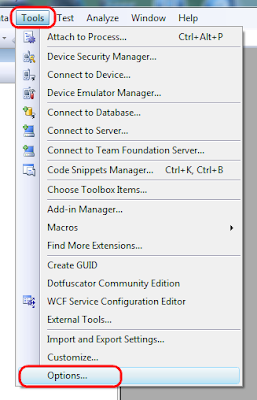 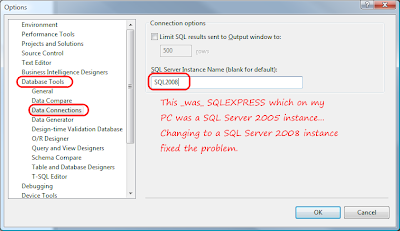 Thanks to simple-talk; and SQL 2008 Express edition error/Add new item on ASP.NET forms. A bit OT - HTH someone...
Posted by Craig Dunn at 03:31