Further to the MonoDroid version, I've just submitted an iOS version of the Monospace 2011 conference app to Apple (fingers crossed it gets approved, and in time for the conference!).

Here's how it looks: 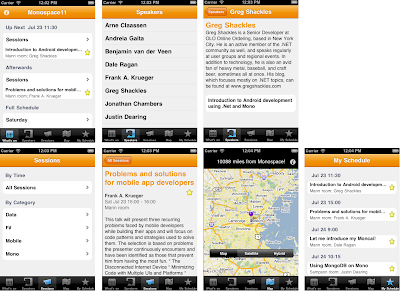 Even if it doesn't get approved in time, the code is open-source and can be found at github.com/conceptdev/Monospace11. It is based on the original Monospace09, PDC09 and MIX10 apps. A couple of guys helped out with the MIX10 version: @migueldeicaza, @kangamono and @chrisntr. I know Miguel in particular was keen for this code to be open-sourced... I think (?) it was one of the first outings of his awesome MonoTouch.Dialog library. I'd like to thank them again for their help (and to note that any remaining bugs or problems are mine). Also note: there is some old code in there (like, almost 2 years)... it scares me a little to put it up on Github, so please, be gentle.

I'll update with an AppStore link if/when Apple is done; but for now just enjoy the code :)

See you at Monospace!
Posted by Craig Dunn at 03:55