An update to MonoTouch (1.4.4) was released today with these changes/improvements (actually 1.4.5 was released a day later). One in particular caught my eye, since I've previously blogged about MapKit in MonoTouch.

So what does that mean? Basically the crafty team at Novell have turned the Apple SDK "pattern" of using a MKMapViewDelegate class to respond to "events" on its head, and instead exposed familiar .NET events on MKMapView itself. *

Here's a comparison of the 'old' and 'new' MKMapView class: 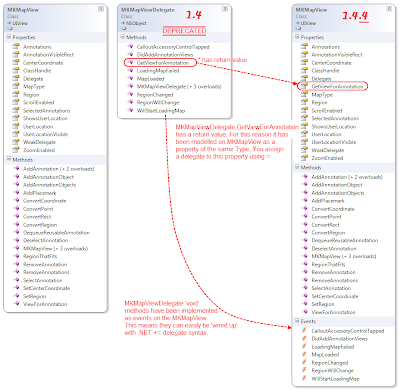 Here are two 'example' delegate methods that work in 1.4.4 (and .5). Firstly here's an example of wiring up one of the "new" events CalloutAccessoryControlTapped. NOTE the += used to attach the delegate to the event.
The second example is probably the most common one - GetViewForAnnotation - which you will need to provide if you want to do any sort of customization of your pins/callouts. NOTE how it is assigned with an equals sign and has a return value!
* imagine these are "air quotes" in this paragraph
p.s. This post has been updated since the comments below. The first two kinda don't make sense now... Thanks for the advice mdi.
Posted by Craig Dunn at 21:39