Having installed iPhone OS 3.0 today, the first thing I wanted to play with (after MMS and Copy/Paste) was the Safari Geographical Location support.

The best example code I found was this iPhone 3.0 geolocation javascript API example... however for some reason the Google 'static map' images wouldn't work for me. I'm not 100% sure why (since the blog post appears to show it working) - but Safari on the iPhone does handle http://maps.google.com URLs in a special way (at least it does if they're anchor/links, in which case it triggers the Maps application).

Anyway, since I was keen to get "something" working, I Googled a basic 'image passthrough proxy' - which seemed to fix the problem. 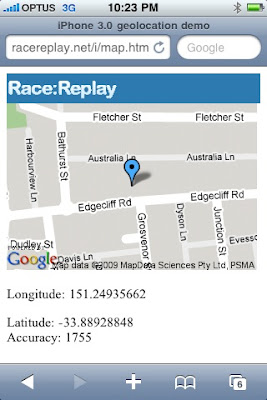 The HTML and javascript is very simple (it's repeated from here).

The MapImageHandler.aspx code is also very short (and was sourced from here).

That's about the most basic geolocation sample you could... now to find something useful to do with it! Thanks to the two authors of the code I stitched together (blog.bemoko.com and guy off CodeProject).
Posted by Craig Dunn at 05:13